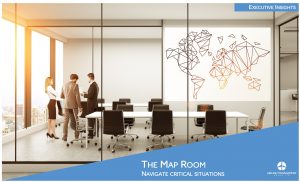 I like to think that Winston Churchill created “The Map Room” as a euphemism for where political and military leaders met to discuss strategies and tactics in relative safety underneath Whitehall in London during the Second World War. The room was full of maps, but I believe others may have called it the War Room.

Understandable as the world was at War, but I assume – probably hope if I am honest – that Churchill, with his command of the English Language, would have been subtle in how he intended to use that “room” as a critical fulcrum of decision making and implementation.

Maps are profound in their design and use. They can represent both a window into the way of thinking about the world, a framework for knowledge, as well as a set of assertions about the world itself. Maps represent a visual image of topography which allows the readers to assimilate information – Big Data – to enable them to position themselves geographically in the world, whilst understanding the complexity of terrain surrounding them. They enable them to set about how to travel from A to B, safely, maybe quickly, but essentially without becoming lost.

In more extreme circumstances such as war, the map becomes a tool to determine your position’s strengths and weaknesses relative to your enemy’s.

The International Cartographic Association defines cartography as “the discipline dealing with the conception, production, dissemination, and study of maps”. An exciting description, but I question its validity about restricting itself to just the art of map-making.

During my many encounters in airline turnaround situations and start-ups, “The Map Room” became fundamental in establishing a centre from which the objective and the means to reach that objective could be “seen”. I could have called it the “War Room” or the “Change Hub” and frequently did so publicly. Still, in my mind, “The Map Room” was a location from which we could plan, plot, assimilate, design, analyse, create, test, check, argue, debate, cajole, persuade, follow, lead, and chat. It had an aura of sensualism, an extravagance of activity. Whatever the issue, the collective force of talent in the room had a sense of determination to “map out” the problem or opportunity and find a solution, implement it, and ensure the entire workforce could equally see and read the same map.

Often the workforce, the strong grassroots of any organisation, had far more insight into the process of making money from flying aircraft simply because they were in the field. Often though, they were never asked. Perhaps management thought the workforce was incapable of using theodolites, staffs or compasses?

I also like to use “art” as a description of cartography – the classic example is the London Underground Map designed by Harry Beck in 1933. A superb, intellectually created and artistically drawn design demonstrated how to traverse the capital city. Sublime in its simplicity and readability, it was copied virtually worldwide – simply brilliant.

As CEO, the virtuosity of leadership is to create an environment where others can work to the best of their ability. To inhale the bouquet of hope and aspiration from one’s workforce is an emotional experience. The rapture created from a highly motivated workforce should not be undermined and can be driven from a map.

Translating concepts, desires, hopes, ambitions, and financials into a Map, reflecting a focussed objective and clear directions, is a profoundly satisfying and rewarding sensation.

Anatole France once said,” To know is nothing at all; to imagine is everything.”

Imagination is central to the creation of a Map of hope and ambition. For me, in other words, a business plan.

To ensure the whole workforce can read the Map, one must introduce the logic of the financial statements to an internal audience; often their role and influence was never explained to them in the overall economic process; they had no map on which to see the impact of their efforts. Introducing financial data to a non-financial audience can be fraught with problems, yet the importance of not treating them patronisingly cannot be underestimated. Whilst P&L, balance sheets and cash flow statements may appear as complicated instruments to an untrained audience, they allow the ultimate consolidation of data into a framework akin to a map that can be seen, analysed and understood.

In the case of one specific airline, I showed it costed 1.20 units to raise 1.00 unit of revenue. The principle clear, the point was made.

Maps and wayfinding are fundamental parts of education and life, we should show their messages in imaginative and exciting ways.

At AMG we have created a “Map Room” full of valuable tools and instruments to help navigate and steer a course through a maze of difficulties. Reading the Map to go orienteering through a company change process can bring the entire organisation together – it can be fun, undoubtedly rewarding, and essential to creating the right environment for others to excel.

Leadership is all about pulling – not pushing.

FOR A DEEPER DISCUSSION ABOUT THE CHALLENGES AND SOLUTIONS ASSOCIATED WITH THIS TOPIC, CONTACT:

Airline Management Group Ltd is a UK based company founded in 2015 whose experienced board and management team have hands on responsibility at C-level in developing and implementing complex airline and aviation industry projects around the world.  Airline Management Group creates dynamic, pragmatic, and profitable solutions to the airline industry with a focus on delivering shareholder return and economic longevity. Our focus is on taking responsibility for implementation.  Our customer focus, network, knowledge and expertise provide value to investors and shareholders as we create and implement innovative changes in the industry. Our collective track record extends across legacy to low-cost carriers, from start-ups to turnarounds in both government and private ownership. 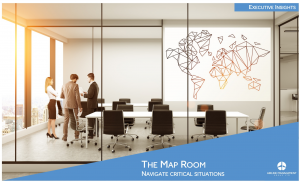